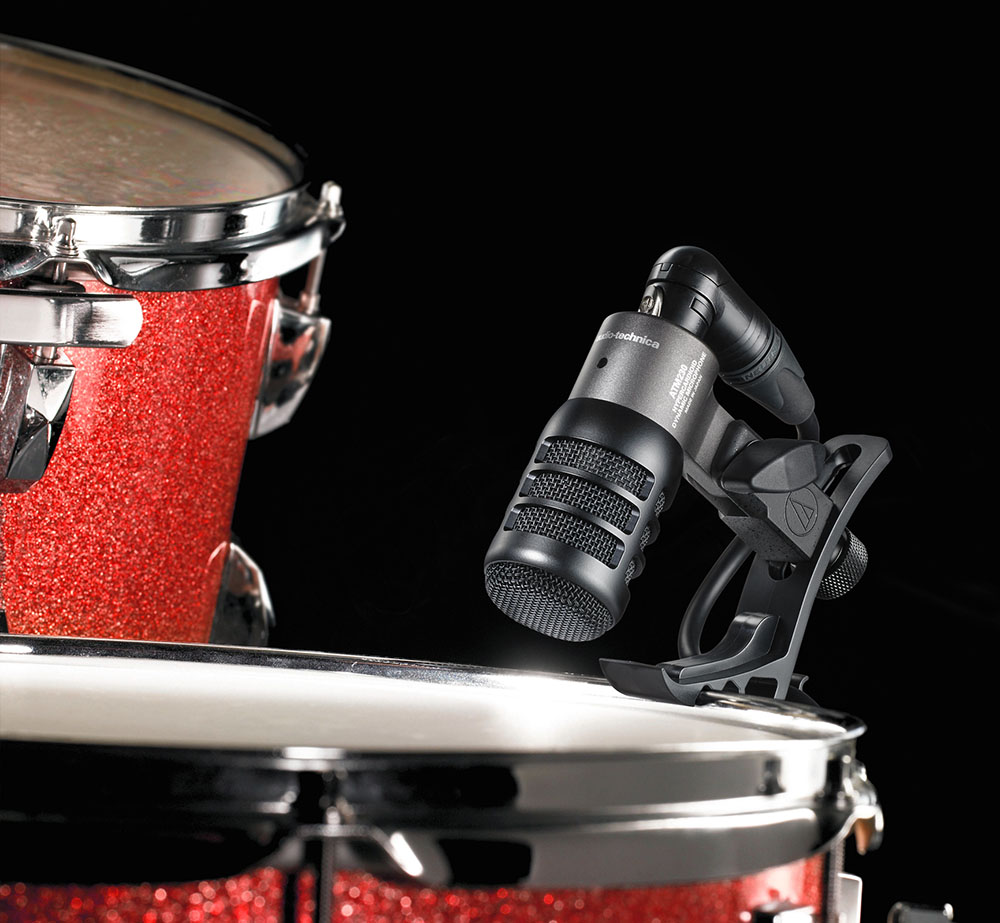 Audio-Technica’s little mic that could, can handle the job on most instruments, but loves the beat of the tom.

Audio-Technica has always made a hyper-cardioid dynamic microphone that was tough, sounded fat and wouldn’t overload. The first version was the PRO25, part of the PRO Series range released in the early ’80s. Originally designed as a kick mic it used a rare earth (neodymium) magnet to help achieve its high output level and fast transient response. Next was the ATM25, much the same mic but re-packaged for the Artist Series released in the early ’90s and sold for twice the price. It was discontinued about 20 years later but came back briefly, as part of a special edition range to celebrate Audio-Technica’s 50th anniversary in 2012. The new ATM230 sees the return of a hyper-cardioid dynamic mic to the Artist Series range, this time designated as an instrument mic, with toms as the recommended application. The main spec that has changed from the ATM25 is the more attractive retail price. The technical specs remain the same as it has ever been.

The ATM230 retains the caged look introduced with the ATM25 but it’s more compact at only three inches long. Missing the familiar red stripe of its predecessors the two-tone black grille/grey finish on the metal body is modern and unobtrusive on stage. It’s a solid little thing. The steel cage’s unyielding layered grille and the way the integral stand-mount locks to the body makes the mic feel like a hammer in the hand. It’s more likely to hurt the drumsticks.

The ATM230 arrives with the same sonic qualities as its predecessors and just a couple of minor updates. The overall character remains but the frequency response is a little more linear across the mids and the pronounced proximity effect of the earlier models has been made less boomy. Handling noise is better too. It’s not a mic you’d choose for its airy detail but the low end response makes up for it. Like the original it reaches deep down. The frequency response is quoted as 30Hz-12kHz and it’s essentially flat to below 40Hz. There’s a presence peak around 3kHz for a bit of crack on the toms but it’s not the most accurate above this and rolls off quite sharply from around 8kHz. It’s not dull to the ear though and in a direct comparison, the ATM230 sounds crisper than its forebears.

The ability to isolate an instrument in a noisy environment, with lots of other mics close by, is where dynamic mics earn their money. Condenser mics sound great and they’ve got all the shiny detail but they can’t grab a tom and push it forward like a good dynamic mic. The ATM230 has a very tight hyper-cardioid pick-up pattern and it’s even at all frequencies. Moving around the mic, it’s remarkable how much the level drops around the side and right behind the mic. It’s not the sort of mic that is likely to need to explore gain before feedback but it’s very stable if it does gets cranked in the monitors.

I have several of the original PRO25s and ATM25s still in regular use. They’re my long-time first choice for live toms and I’m not alone. When I use them I often get comments from other sound mixers who hold them in high regard as well. They always nominate toms and brass as the best applications. The ATM230 is the same. It works beautifully on jazz kick drum, but for rock it may miss the low peak of the modern kick mics. It works well on snare drum but may not be bright enough without adding EQ. On toms however, the combination of fast attack and powerful low-mids is just right, they seem to come straight at you and rarely need any EQ.

The same qualities mean it works just as well with percussion; not so much on picked or shimmering instruments but the skinned, dynamic ones. It’s just the thing for anything from bongos to congas, and my favourite, the bodhrán, where the small size means the mic can get in close to the skin but won’t be damaged when it gets knocked… as it inevitably will. People think I pick on the folk music scene but I’ve found they’re the most likely by far to trip over leads and bump mics with their instruments. Brass is the other favoured application and saxophone is good too. The slightly scooped mids work with the added body lower down to fatten them up. The tight pattern helps isolate the individual instruments in a section and the size is great if they’re close together. Also, you can get right on them. It won’t worry the mic if it’s halfway down the bell and they’re blowing to bust.

Guitar and bass cabs are the other two approved applications. Again, high volume is no problem. Bass cabs seem to overwhelm some mics and can sound bloated, especially mics with lots of proximity effect. The ATM230 is thick but un-fussed and used in close you can really hear the speaker working, rather than the box booming. Same with guitar cabs where the added warmth, accurate mid-range and absence of shrieking highs prove a good combination.

Condensers pick up too much, vocal mics don’t go deep enough…toms need their own mics. The ATM230 is sort of a general-purpose instrument mic but really it’s a well-priced, kick-ass tom mic that can take a pounding. And after using it I’m adding snare to the list of other recommended uses.

Audio-Technica do details well. The mic package includes a thick, padded carry case with a proper zip. Thoughtfully included is an Audio Technica AT8665 plastic clip-on drum mount. Not only does it save a mic stand but it gives you a use for the supplied ¼-inch to ½-inch thread adaptor, finally. I’m in two minds about clip-on mounts and I’ve found some drummers don’t like them. A 300gm mic on a clip-on can affect the sound and balance of the drum, and there’s the risk of marking the rim, but they can be handy if you’re short of stands.

The adage, ‘when you’re on a good thing, stick to it’ applies here. The ATM230 continues the tradition with just a tweak or two to bring it up to date. High-quality construction, professional looks and a modest price for a microphone I can guarantee will last a long time. I’ve told the story before about my two PRO4L vocal mics given to me by Smeer — who screamed lead vocals and played great guitar for thrash punk band Depression — in 1987 as payment for a recording of the band. When I got the mics they looked like they’d been used as drumsticks or involved in riot control. But they sounded very good and I used them for years on toms and occasionally vocals. They still work today nearly 40 years later. Nice one Audio-Technica.