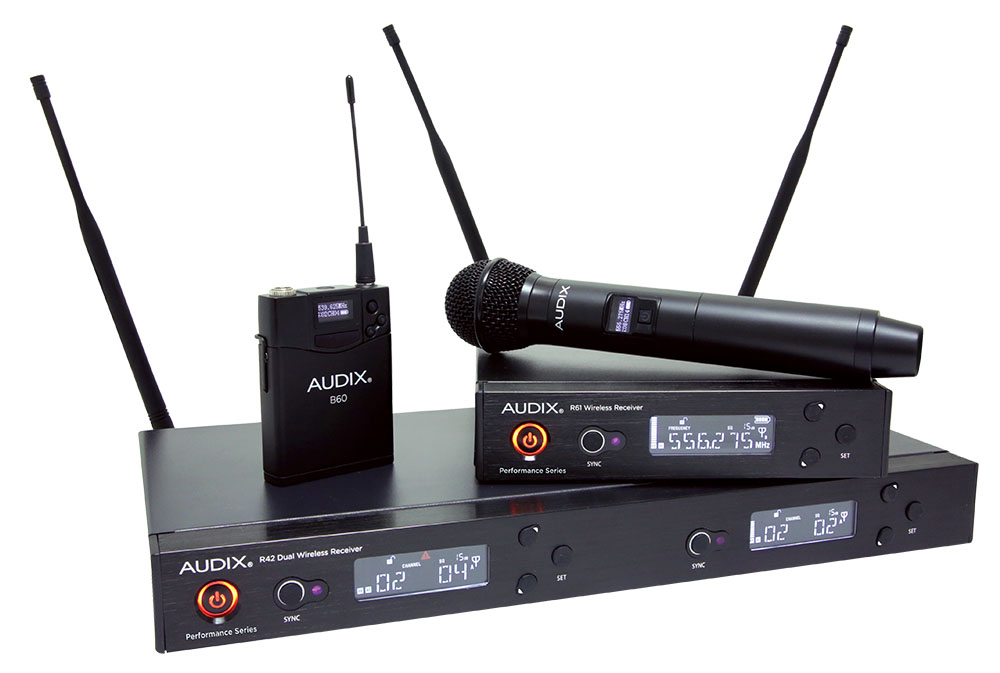 Audix’s new wireless mic system throws everything it can at the Sennheiser/Shure duopoly.

By many accounts, Audix’s previous wireless system was a bit of a joke. I never had the opportunity to use it, so I can’t chime in other to point out that it was called RAD 360… RAD 360, it sounds like a white shirted marketing guy trying to ollie in front of a crowd of high school skateboarders and falling flat on his face. Not the best look.

Breaking up the Shure/Sennheiser wireless duopoly is hard. Audix’s new Performance system wireless is a confidence builder. Atoning for previous miscues by packing in features not usually seen at this price point. For a start, the name has got all the right components — a number hierarchy, and Performance says ‘serious, but not ULX-D serious’ so we know where it should stand.

The base model OM2 dynamic mic single channel system I reviewed is just shy of $1000 at retail, sitting right in the same bracket as the base models in Sennheiser’s 100 G3 series and Shure’s SLX systems if you’re looking at the analogue UHF range. Not a lot has been happening in this space lately. Sennheiser has really got itself sorted with the 100, 300 and 500 ranges, putting more effort into its budget (XS) and high end (9000 series) offerings. Likewise, Shure’s more recent efforts have been the cheaper BLX and the more advanced offering in QLX-D. Perfect timing for a new entrant.

There aren’t many greater differentiators between handheld wireless systems than the feel and weight of metal versus plastic. Audix’s H60 mic body feels just right with a completely metal shaft and hard plastic antenna nub. Unscrewing and screwing the handheld elements apart was a little dicey on the pre-production review model, but I’ve since had a go at the production models and they thread into each other with confidence.

Its small LED brightly displays the current frequency, group, channel and battery status in normal operation, switching to a simple mute notification when its power button is momentarily pressed. Powering the mic on and off requires a longer press of around three seconds, which is much safer than a switch system. There was a tiny handling noise click when you mute, and the signal takes a second to re-establish when un-muting, which is a common trait of wireless.

Perhaps the biggest feature of the handheld is its interchangeable capsules. Not just because you can swap them out but because Audix has made the thread and connection system compatible with Shure. There’s no alliance here, just Audix realising its customers like choice. There are more than a few bands touring with Audix’s OM7 capsules adapted to a Shure body via a Soundtools adaptor. The new capsules will let them fit straight on, and vice versa with a Beta 58 or KSM9 capsule screwing directly onto the Audix. As it stands, there are options for the OM2, OM5 and VX5 condenser, with an OM7 capsule coming soon.

Two AA batteries slide up into the body of the receiver like you’re slotting rounds into a rifle. As well as the mic readout, there’s a big battery indicator on the receiver’s front panel which is fairly easy to read, and battery life is supposed to be 10 hours. I never tested that theory as I have a habit of swapping out batteries before a show, and they never registered a drop over a couple of hours.

A dipswitch in the battery chamber lets you choose either 10mW or 40mW of power transmission to the receiver. Counterintuitively, less power can be a good thing. With bigger channel counts, it can stop different systems treading on each other’s toes with intermodulation frequency interruptions. That said, obviously having a 40mW option makes distance applications more stable. The cheaper Shure BLX, for instance, is set to 10mW only.

At the other end of the line, Audix has also made sure its receiver looks and feels solid too. There are two options, the single-channel R41 half-rack unit, or dual-channel R42 full-rack unit, which splits the antennas so you only need one set for both channels. Both units tune within a 32MHz wide frequency range, with two options — either between 522-554MHz or 554-586MHz. There is a range of 60 series receivers coming later in the year, which will cover the entire 64MHz at a 30% premium. It also doubles the recommended channel count to 16 and gives you 2560 tuneable frequencies, as opposed to the 106 pre-coordinated ones of the 40 series. The operating range also jumps from 90m to 137m in the clear blue sky. Both the handheld and bodypack transmitters already transmit over the entire 64MHz range, making it possible to just update the receivers if required.

Setting up is breezy, holding either of the up/down buttons sets off an auto scan function that takes about 30 seconds to scan the lot and settle on a group and channel. While that part was easy, it would be more comforting to get a readout of clear channels in the group to make sure I had enough to work with. It seemed to be unsure of which group was best; every scan would come up with a different result — one with 14 available frequencies, the next with only eight. It also wouldn’t tell me if any of those channels in that group were compromised. A channel list scan would be nicer, especially when setting up multiple units. Syncing the transmitter was super fast, faster than a Sennheiser 100 G3 system. Just drop the transmitter’s pants, hold it up to the infrared node, hit a button and you’re away.

You access the menu for further options by holding down the Set button. Frustratingly, after you select and change a parameter, it bounces you right out of the menu altogether, requiring you to press and hold again to adjust something else. It’d also be handy if there were some markings other than Sync and Set. A ‘Scan (Hold)’ marking on one of the Up/Down buttons would save a few questions.

The receiver also has squelch, with an adjustable threshold from 5dB to 45dB in 5dB steps. In practise, I found anything above 25dB severely limited my range, with the maximum setting persistently cutting out. Around 25dB was stable to about 15m, and 10dB let me go anywhere I wanted in a large auditorium. There’s also a Pilot Tone Squelch you can turn off if you’re feeling dangerous, and a button lock option if you’re not.

I tested the unit out in a system where I have a variety of wired mics — including Audix OM3xb dynamics and SM58s — as well as Shure BLX wireless with SM58 and Beta58 handhelds.

When I was setting up the system in some headphones, the Audix seemed noisier than the BLX. I started investigating levels and found out the receiver comes preset from the factory with +6 (presumably dB) gain on the receiver, which is also the recommended starting point for dynamic mics in the manual. Coincidentally, that setting did match the sensitivity of the wired OM3xb I had on hand.

However, when I unscrewed the capsule from the handheld, a dipswitch lets you set a transmitter output level of either 0dB, -6db and -12dB. It was set to -12dB. When I set the handheld output to 0dB and the receiver level to -6dB to compensate, it brought down the noise and the compander seemed to behave more comfortably. Obviously the level you set would depend on how hard your singer is pushing into the mic, but even when I was giving it a red hot go and pushing the meter to the top of its range, there didn’t seem to be any noticeable distortion.

Like most analogue compander systems in this range, it failed the key test, turning the jangle into a deep packet of chips. But other than being a little more excitable than the wired version, it didn’t seem to have a noticeable impact with voice. It responded to sibilance similarly when compared with the wired mic. Overall, the OM2 is a well-behaved dynamic. Relative to an SM58 and the ‘extended bass’ OM3xb, it sounds like it has a built-in, high-pass filter. It cuts through, makes for a killer, pre-tuned presenter microphone, and is useful on singers you want to cut the mud out of.

The provided screw-on antennas are huge, and the optional ADS48 also works with the receiver systems to provide antenna distribution for up to four units (eight channels when combined with the dual-channel units). I did notice that cupping the end of the mic made it struggle to send signal, an issue I couldn’t replicate blocking any part of the BLX handheld. It’s highly unlikely that would ever happen though. On the plus side, the bodypack has a removable antenna, which is not typical of this price range. It also comes with a handy soft carry case; another little perk.

Audix has really powered back into wireless with the Performance series. It’s added features here that firmly put it in step with the competition: metal construction and interchangeable capsules are just some of the highlights. PAVT is also bundling rack ears in; an Australian-only special. It looks professional, feels right, sounds great, and the impending 64MHz option will really put the pressure on. Being able to upgrade or swap out capsules is a great benefit for a simple wireless system, and the native capsule swapping is big news for the hybrid Audix/Shure users out there.