Bring Me The Horizon – LIVE

British electro metal band Bring Me The Horizon toured their lively show around Australia although unfortunately their sold-out Adelaide show and two Melbourne shows were postponed due to lead singer Oli Sykes’ acute laryngitis and medical advice to rest.

Ben Inskip designed one of the year’s most stunning light shows at Sydney’s Horden Pavilion. The lighting intertwined with the large video presence filling up the letterbox shape of the venue’s stage in a spectacular fashion. The lighting was often big blocks of colour that packed a punch next to the video element.

“When we have the space the screen grows accordingly,” said Ben. “The band are very passionate about their video content and Oli is very creative. We also had two stage width steps with video screen facades.”

The design in Australia was the same as that used for the band’s last headline tour of the UK where the brief was to really push the video aspect of the show and get maximum impact from it. Lighting would then add shape and animation to the stage and work with the video to create a smart and tight looking show. With time required to build the set and video, the lighting would also have to be quick to set up.

“The original plan was that it all went on pre-rig, was fast to rig, didn’t take up too much room and would have maximum impact,” explained Ben. “We spec’d Robe Robin Pointes, Robin LEDWash 600 and Philips Showline Nitro 510’s but in Sydney we had Clay Paky Sharpys and Mythos, GLP impression X4’s and Stormys plus Colour Blaze under the perspex decking. They do the job and are bright enough to cut through the video. I find a lot of Sharpy beams, when positioned correctly, can make a room look much larger than it is.”

Ben’s lighting rig is fairly simple yet effective; three straight trusses and a reasonable amount of gear on the floor.

“I can find the Stormys a little bit tricky to work with but that may be because I have been used to using Nitros for so long,” commented Ben. “The process of fixture swapping them can be a bit difficult in terms of how the dimmer curve and colour behave but overall they’re very good and bright.”

Sometimes Ben’s lighting compliments and mirrors the video content, at other times it blatantly contradicts it. 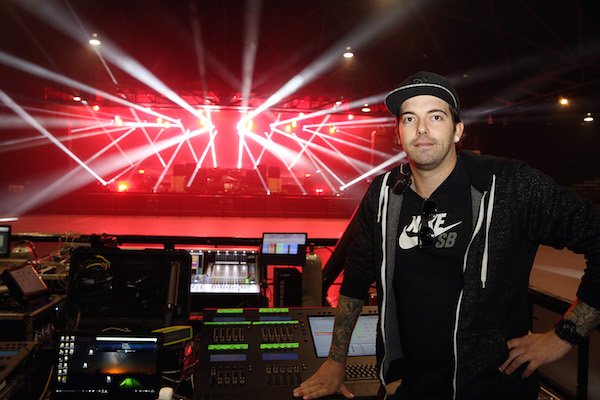 “It’s quite a fast paced set with a few ups and downs,” he said. “They have a large catalogue of songs so there’s quite a lot of programming in the console. They’re a fun band to work with and are very trusting which gives me freedom to experiment a lot. The band don’t like too much front lighting and for a long time, they didn’t like being lit at all. The shows used to be really dark and silhouetted with lots of backlight but their latest album has songs that need them to be lit more. There’s a little bit of front light but the front truss is actually set on stage quite a bit and used more as overhead truss that front truss. We added a fair amount of side light to compensate for little front light and no followspots.”

“The X4 Bars are brilliant and lots of people seems to be using them at the moment,” added Ben. “I’ve used them as sidelight since we started the tour and have upped them to having a few more on the floor for a little bit extra. If you want to zoom them right down you can create some really cool shadow effects if you tilt them behind the band.” They also work perfectly alongside the rest of the X4 range.

For control Ben was running a Jands Vista L5, a platform he has been using for the past four years, although their flying kit is usually a Vista S1 and M1 with a laptop and Wacom tablet.

“Initially the show started off being just a cue-stacked show, cue to cue, but it’s now a timecoded show and timecoding with a Vista is really, really easy,” Ben remarked. “It’s quite fun to do instead of it being a chore.”

FOH engineer Oliver ‘Hutch’ Hutchinson also looks after video although he admits running the content isn’t too difficult. The video and the lighting cues run off the same timecode, and Hutch spends a lot of time programming with Ben.

“The video content is all done in advance,” Hutch explained. “Every time the band make a change in the set backline tech Jamie McKivitt, who looks after the playback, will bounce me a guide track with timecode on one side and audio on the other. I then piece it together with the video and so when it comes to the live show, I don’t really have to do anything other than the occasional bit of fading.”

However Hutch does have to ensure everything fits the screens as they do play with a lot of different aspect ratio screens on tour. Fortunately the letterbox shaped stage at the Hordern was ideal for the design of an 1152 x 288 main screen with an 1152 x 48 on each of the steps/riser sections. All video was supplied by Big Picture.

Hutch used the in house L-Acoustic V-Dosc PA although he describes himself as a d&b audiotechnik man, saying the low end is a lot better for music such as that played by BMTH.

“The d&b is generally more musical in the sub-frequencies,” he explained. “I don’t really like L-Acoustics for the heavier sound but it’s not terrible.”

For control Hutch ran a DiGiCo SD5 complete with Waves Grid Server having only recently switched from using an Avid Profile chosen mainly for convenience and the knowledge they can be picked up anywhere.

“We did a show at the Royal Albert Hall with a full orchestra and choir earlier this year and the house console was a DiGiCo SD Series,” Hutch said. “It had the channel count for the 150 channels we needed and so I used it, and liked it very much. I prefer the layout, the feel and most importantly, the sound. They are easy to use and so far have been very reliable. It also has the ability to feed video down the multicore which is handy for me!”

Hutch describes mixing for BMTH as loud, challenging and fun saying that the band nowadays play quite a diverse set.

“The songs from their early albums are very heavy whilst the newer songs are more of a pop genre which poses quite a challenge,” he remarked. “I have no outboard gear but do have a Waves Grid Server which I run a couple of plug-ins on although I’m using them less and less. Really they’re just a hangover from my Profiles days when the plugins were essential. The internal effects on the DiGiCo seem much nicer so I’m slowly taking all the Waves out, there’s just a couple of CLA-76 compressors which do sound nice.

“It’s not an effects-heavy kind of sound and I only have one delay part. The rest of it is just drum reverbs, backing vocal reverbs and a little bit of thickening on Oli’s voice.”

The band have an endorsement with Shure so obviously use their microphones wherever possible although there are a couple of Sennheiser mics used.

“We tend to go for standard models such as the Shure 57 so that if we are abroad and break one, we can easily get a replacement,” added Hutch.

Australian monitor engineer Jared Daly ran monitors on an Allen & Heath D-Live s7000 console. The band all use Shure PSM 1000 Personal Monitor Systems with JH Audio molds although Oli does have a tendency to rip his out so d&b J8 and J-Sub sidefills were added. A Shure Axient system ensured solid RF performance.

Chameleon supplied the lighting and JPJ Audio the audio. The post Bring Me The Horizon – LIVE appeared first on CX Network.