dbx has packed its lunchbox with loads of character, including some miniature reprises of classic designs.

Last issue we put the new dbx 580 mic pre through its paces and liked what we heard. There were a few loose ends to tie up, namely the other four 500 series modules alongside it, so we’ll be dining out of the dbx lunchbox and digesting the very affordable 510 Subharmonic Synth, 520 De-Esser, 530 Parametric EQ and 560A Compressor Limiter. 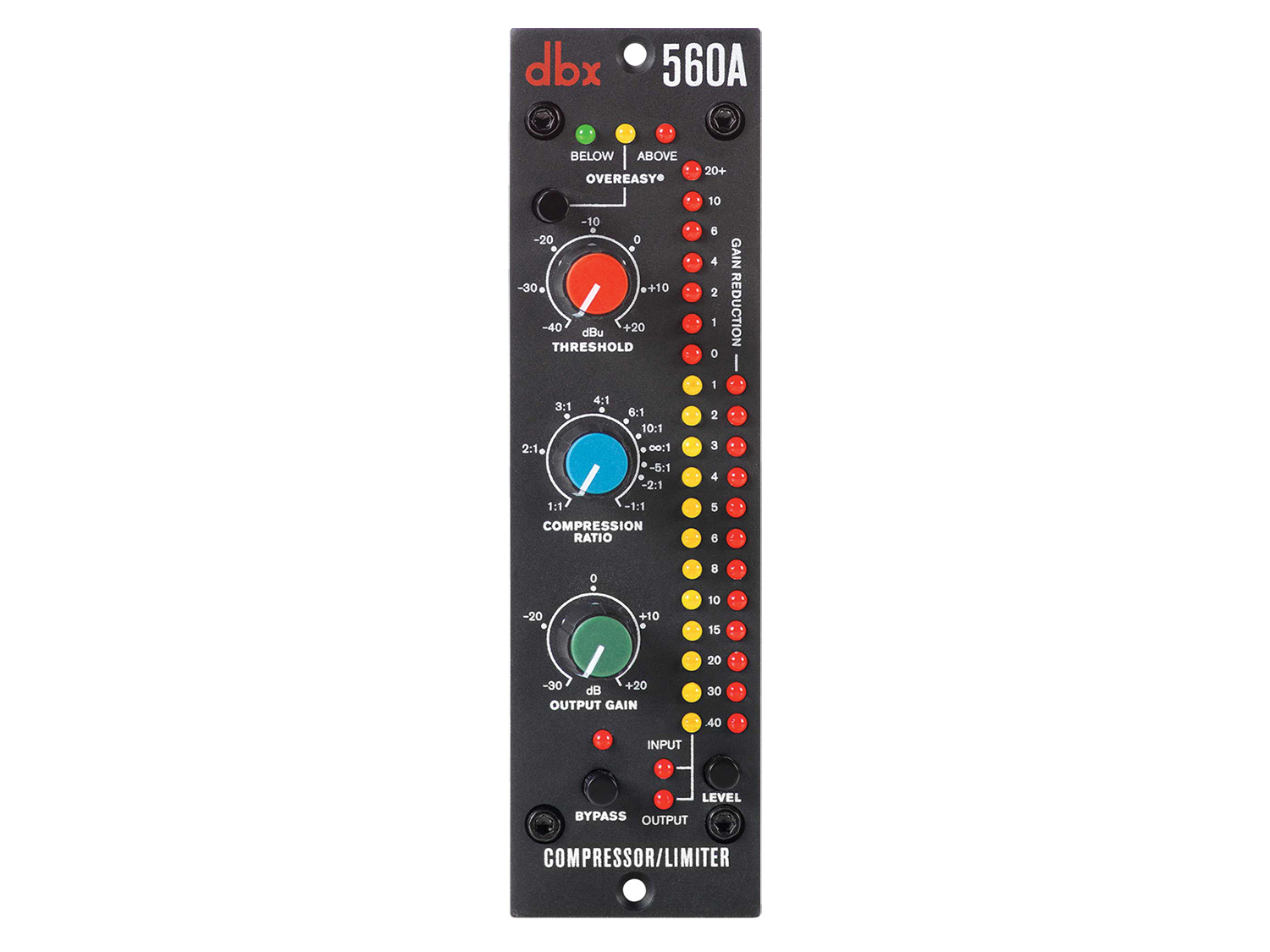 TAKE IT TO THE LIMIT

The 560A Compressor Limiter is unashamedly based on the design of the evergreen 160A rack unit model, a mainstay of live and studio racks just about everywhere for the last 20 years or so. The 560A is a simple three knob affair with continuously variable compression threshold, ratio and output gain controls and very detailed I/O level and gain reduction LED metering down the right hand side of the faceplate. Beside the bypass switch down low is another switch to select either input or output gain metering. At the top of the unit another switch engages either hard-knee or ‘over easy’ compression curves and a dedicated trio of LEDs shows when the signal is below, at or above the knee of either curve.

In use the 560A is musical and does a great job of controlling levels in a fairly neutral way. On guitars and bass there is a subtle thickening of tone in the low mids which is very welcome, while on kick and snare the 560A can do subtle or dramatic dynamic work on your signals while imparting a satisfying thud to drum sounds. Vocals sent through the dbx come out the other end both tonally unmolested and nicely controlled. For those who haven’t used dbx compressors before, the ‘over easy’ curve is quite forgiving and soft while the hard-knee setting is far more grabby and lets more of the transients through before acting upon the signal at higher thresholds, while a lower threshold and high ratio delivers brick-wall limiting with no trouble whatsoever. Personally I favour the ‘over easy’ sound and the abilities of the 560A as a relatively transparent dynamics controller rather than a ‘smash ’em up’ colour box. The lack of dedicated attack and release controls means there’s limited fine tuning available, but overall the 560A is a very useful and musical tool for a wide variety of tracking and mix applications. 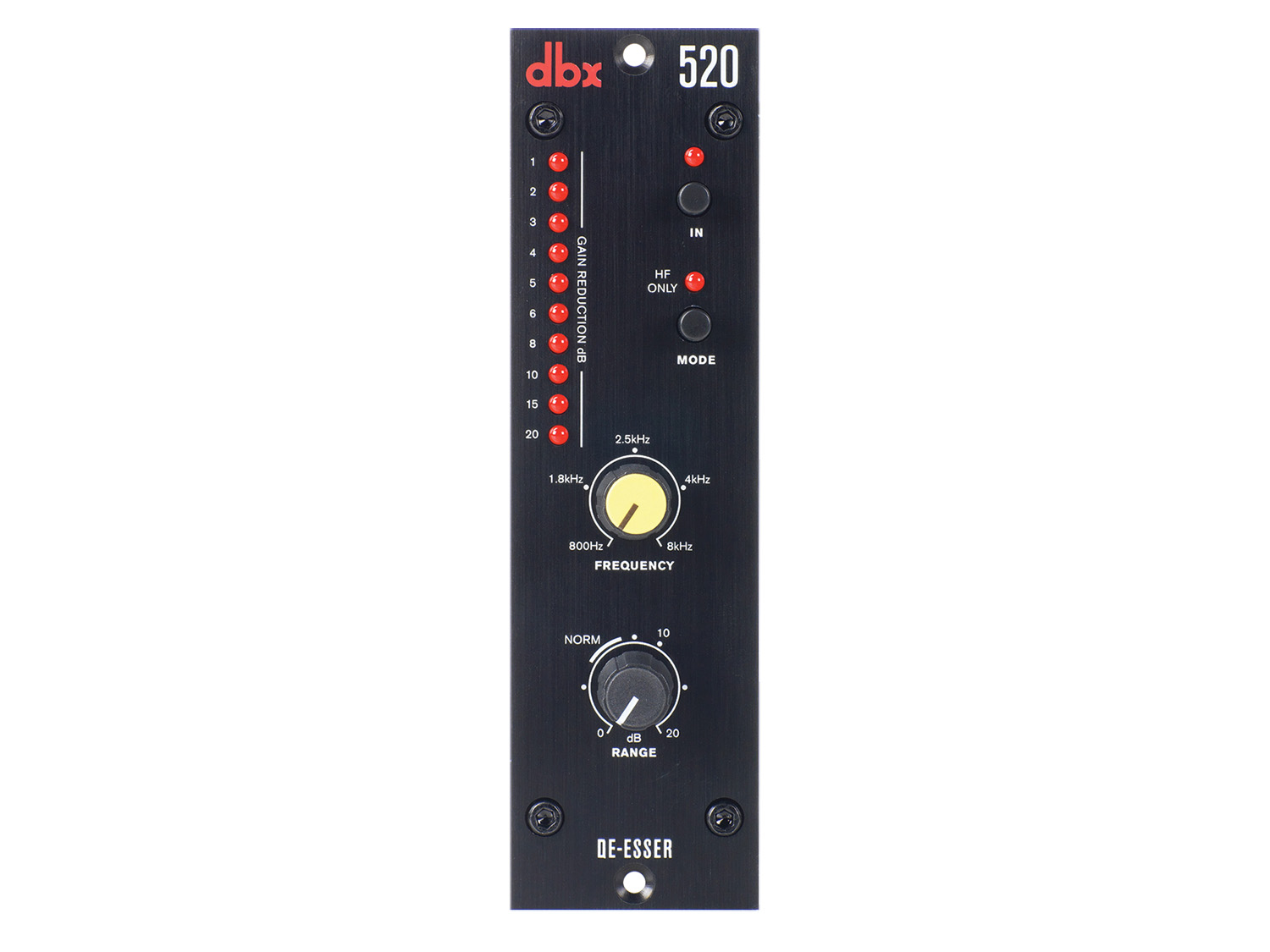 ESS IS FOR SENSATIONAL

The 520 De-Esser is the most minimalist and simple to use module in the new dbx 500 series range. It is a close reproduction of the  902 module from dbx’s old 900 series and as such is a beautifully effective piece of audio design. Put your overly bright, cheap and nasty modern condenser recorded vocal or spiky 4kHz-heavy acoustic guitar signal through this device, set your de-essing threshold and your amount controls to around midday and hit enable… job done. If you really want to fiddle around you can try engaging the ‘HF Only’ button. Sometimes it sounds better, sometimes it doesn’t. I’ve said this before in this magazine and I’ll say it again — I really do think the 902 de-essing circuit (and now 520) still pulls down the pants of every software de-essing plug-in I’ve heard. It’s super musical, very hard to get wrong and it doesn’t suck all the joy out of your top end. Props to dbx for recognising the fact and regurgitating it here for a new generation of audio engineers… love it! 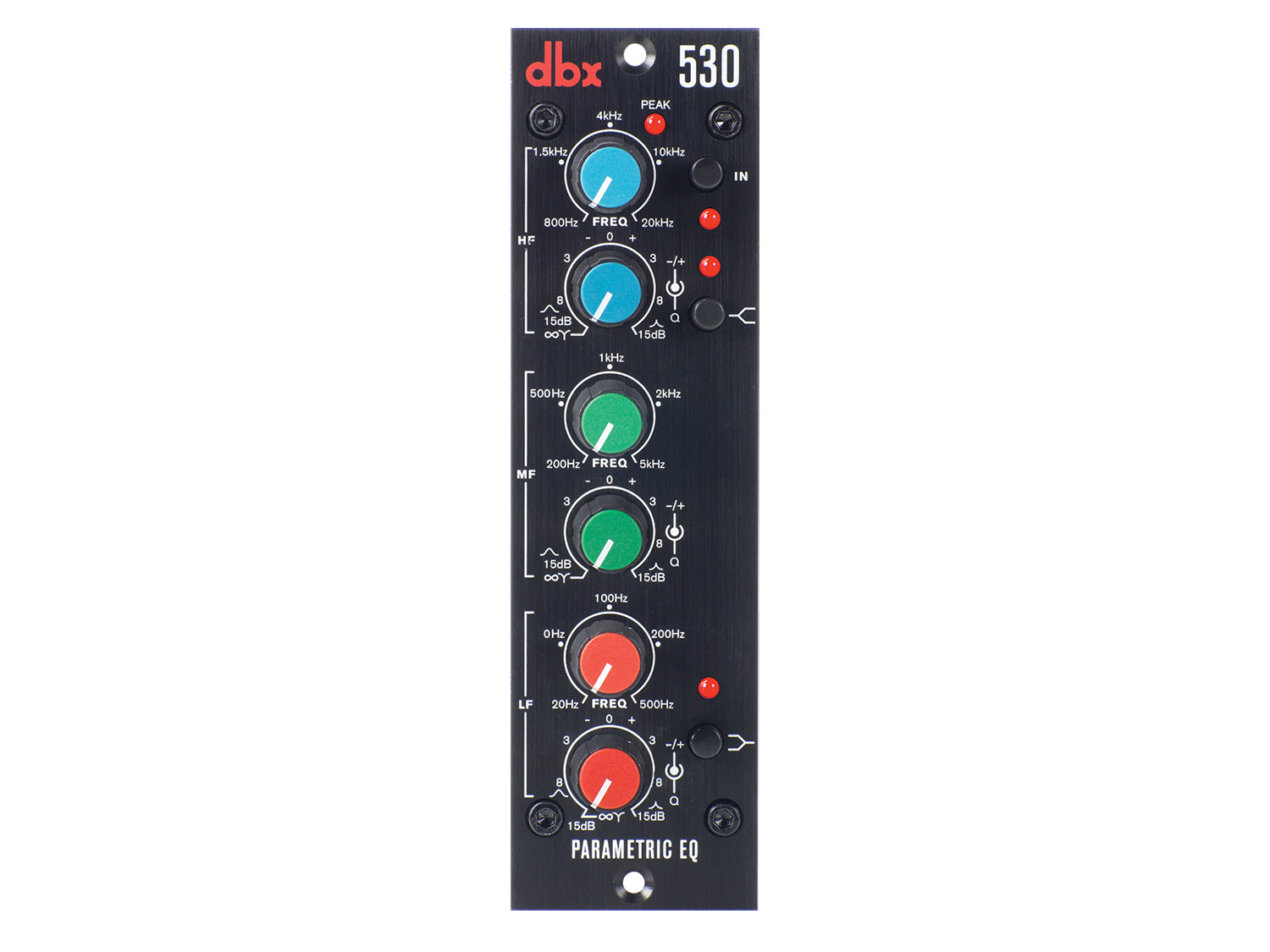 The 530 by contrast is a heavily populated 500 series module with three bands of fully parametric EQ. Again there is a very large debt being paid here to the 900 series via the 905 EQ and that module’s modus operandi is exactly reproduced here. Each band consists of a dual concentric knob. The inner pot controls gain boost or cut up to 15dB and also offers a problem-frequency-killing ‘infinite notch’ mode when switched fully anti-clockwise. The outer pot sweeps between gentle bell curve and tight peak EQ curves while another continuously variable knob dials in the required frequency. The three frequency bands overlap, with an overall range of 20Hz to 20kHz. The upper and lower bands can also be switched to shelf mode and there’s a bypass switch and a peak LED at the top of the faceplate.

The sound of the 530 is nice and punchy in the mids, sweet in the highs and solid but not gigantic in the lows. It’s a great general tone-shaping tool for things like vocals and guitars while there’s enough tightness in the Q to do some proper analogue surgery on troublesome frequencies. The lack of centre detents on the gain controls is a little annoying and recalling settings will obviously be tricky with this module’s small knobs and basic legending. The layout is tight but quite functional and more flexible than the majority of 500 series EQs given the fully parametric nature of the three bands. 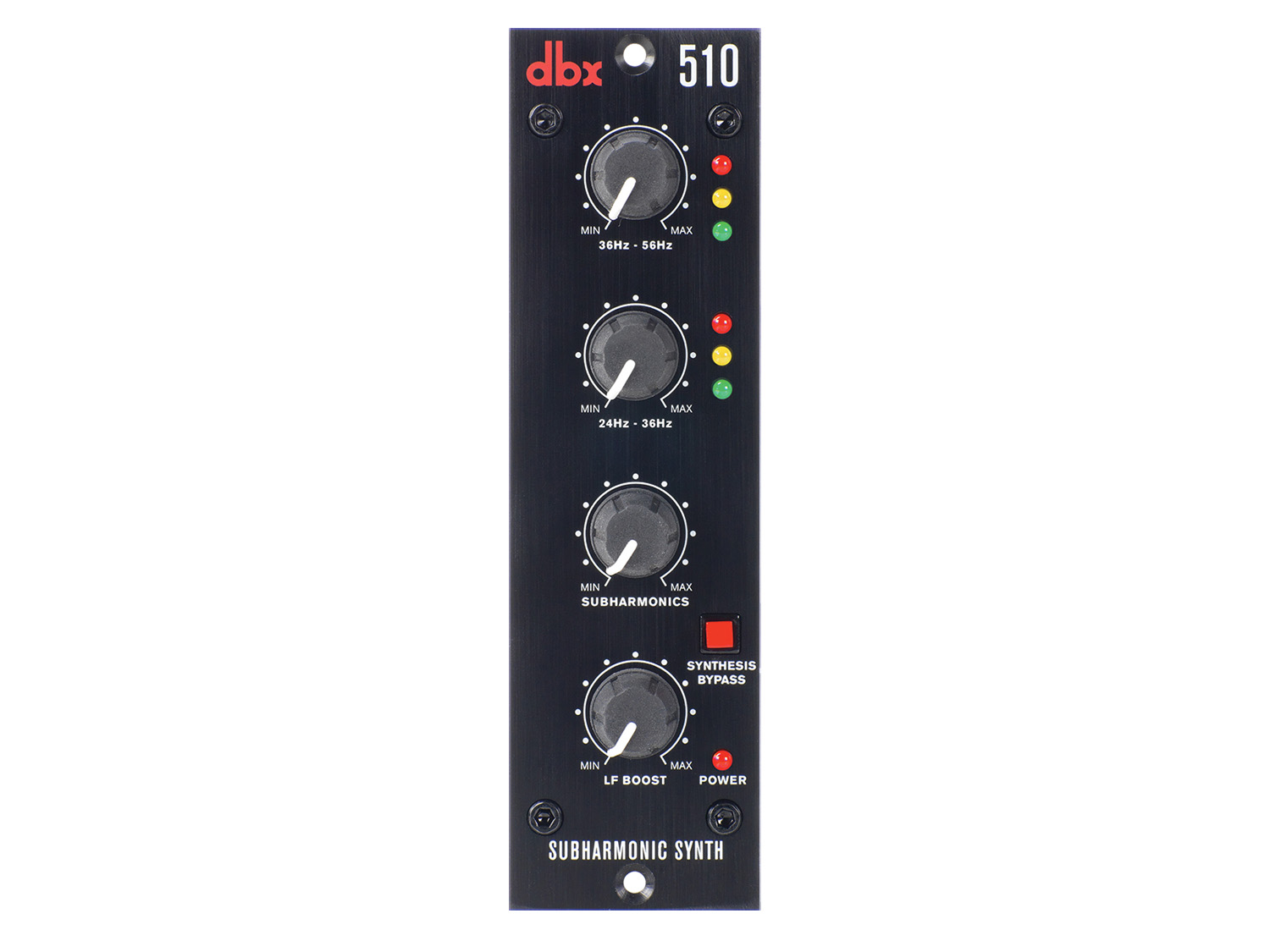 Finally comes the 510 Subharmonic Synth, the joker in the pack and certainly the dbx module that bucks the small-coloured-knob trend of its siblings. While based on the vintage dbx 120’s circuitry, the larger silver rotary controls of the 510 are vaguely reminiscent of hi-fi amp controls of yore and the layout is suitably straight-forward. Two band controls dial in frequencies between 36-56Hz and 24-36 Hz and are flanked by their own three LED gain meters, while below are controls for adding subharmonics and low frequency boost. It pays to use your ears when working the combinations of these controls. Each control is independent but they do affect each other and things can get pretty… erm… bassy down there pretty quickly with this device.

The 510 really packs a whallop down low and is a great tool for reinforcing deep frequencies in things like drum, bass and synthesiser parts. The basic concept is to create harmonics of the existing frequencies an octave further down and I was quite impressed by the 510’s ability to add weight to whole mixes as well as individual sources when added judiciously. However, be warned that this module has the ability to really mess up your signal path with excessive frequencies below 50Hz. There’s a real art to getting things right with this particular tool and you need decent speakers and/or headphones to hear what’s going on. Compared with the plug-ins I sometimes use to extract extra bottom end from sounds, the 510 produces much more refined and ‘natural’ sounding results. Sometimes this only becomes clear when you hit the bypass button and hear what the original sound actually was.

The new range of 500 series dbx modules is a welcome addition to the burgeoning ranks of available modules. While they are aggressively priced they don’t sound or feel cheap and they are serious audio tools for a wide range of audio situations. When you link a few of them up, as I did for an afternoon, they also make pretty deep channel strips that can go places most plug-ins can’t quite reach. If you’ve never had the pleasure of dialling in a decent analogue EQ on a vocal or a snare drum you could do a lot worse than starting with the 530, while compression hounds will love the ease of use and sonic quality of the 560A. Meanwhile the 510 and 520 address more specialised needs and do so with quality sonic results. dbx has certainly laid down the gauntlet with its current pricing for this range of modules, so if you’ve got a spare couple of spaces in your 500 series lunchbox, you’re going to have to go a long way to find a more cost effective outboard audio dining experience!