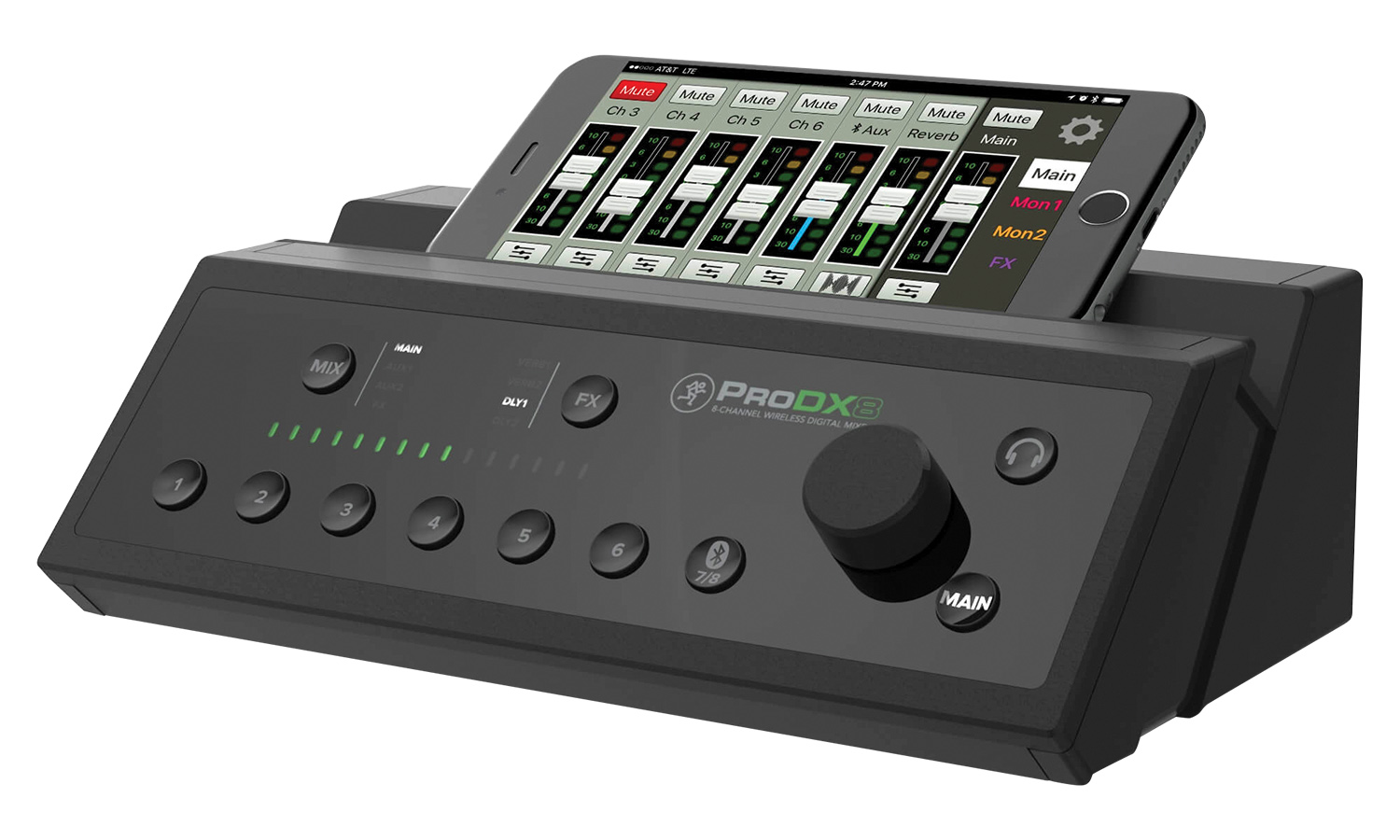 While we’re more likely to get excited about the latest digital live consoles with virtually endless input counts and inexhaustible DSP, we’ve still got a soft spot for cute and functional mini-mixers.

Most of these mini-beauts are analogue, but Mackie has expanded its digital console line down to the baseline with the ProDX series. So far, the series comprises an odd-looking duo with a look more closely aligned with a bedside alarm clock than anything common to pro audio. Spare them some attention, though. The ProDX mixers are so practical that I’ve wound up wanting one.

If you’ve used Mackie’s DL mixers before, you’ll feel right at home with the ProDX’s control app MixerConnect. Once it’s installed on your smartphone, getting it running with the ProDX is as quick as unwrapping a mic cable — select the model you’re connecting to, then press and hold the Bluetooth button on the mixer. Done.

Weirdly, a fader’s unity position is right in the centre of its travel. So if you’re ‘sight mixing’ according to how a regular desk’s faders are laid out, you may find your levels are all +6dB or above. The lack of channel gain control may be the reason for the positional offset.

Channel processing is a piece of cake. Touch the icon underneath a fader to reveal a panel where you can set effects send level, compression amount, and EQ. The three-band EQ has a sweepable mid band, plus a high-pass filter. All mix tabs sit permanently to the right, so you’re only ever a touch away from tweaking a foldback mix or returning to your L/R mix. You have 16 options for the effects engine, eight of which are various reverb types, and the other eight include chorus, doublers, and delays. Though more equitable with the ProDX price, the reverbs still have the same artificial quality as Mackie’s other recent digital consoles. Tap the gear icon below the master fader to see a seven-band graphic EQ for all outputs. Being seven bands, you’d use this more to perform broad brushstroke mix enhancements than surgical problem frequency notching.

If your phone battery dies, the ProDX mixers let you perform all major functions right from the front panel (unlike some other app-controlled mixers). Sussing out the ‘one knob, many buttons’ workflow takes five minutes before it feels entirely natural. Simply select a mix, then a channel number, and use the knob to control the channel’s level in that mix. Same for effects.

Applications for the ProDX mixers are endless. And it’s in a niche of its own compared to analogue counterparts, which likely won’t have built-in effects, GEQs on every output, and wireless app control.

It’s good fun for small-time needs. Running up a little acoustic band for a backyard party? Or need to manage a few inputs for your pub or restaurant? Maybe you want something super portable to accompany your lug-around PA at gigs? ProDX has you sorted, and smartphone control means a quick mix change is as accessible as reaching into your pocket.