Reason 10 is the greatest expansion of the all-in-one DAW yet, with an injection of fresh drum samples and loops, two huge new synths, three sampled instruments and two of the most essential rack extensions. The list of new stuff is formidable; here are my Top 5. 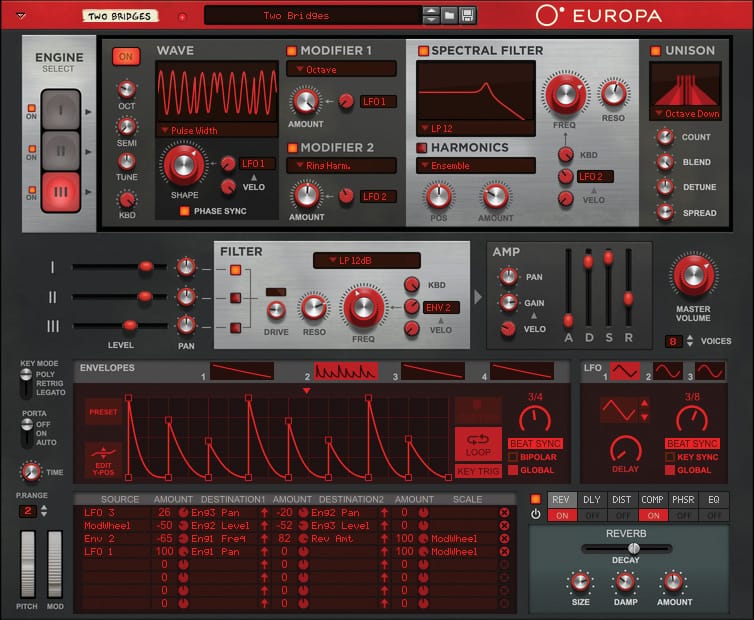 Compared to Reason’s previous titan of synthesis, Thor, Europa looks deceptively simple — lacking Thor’s modularity, sheer complexity and wealth of parameters. Instead, Europa offers direct transformative control over algorithmic wavetables, allowing fine tweaking over all facets of the sound: from its specific overtones through Europa’s spectral filter, to multiplying, syncing, mirroring and quantising the waveform (all modulatable!). Waveforms can come from the list of included digital and analogue-like waveforms, or may even be drawn into the envelope section. This newly-designed component, which also features in Grain, lets the user select and edit any of the envelopes, or draw their own to be used for modulation, as a filter spectrum or as an oscillator. Once created and fattened with the onboard effects and Monopoly-rivalling Unison mode, Europa produces polished, production-ready sounds: huge leads, tight basses and smooth, dynamic pads; all ready for your next club banger, or to sit in the background of the classiest keyboard split. Whether you’re a patch browser or sound designer, Europa is my No.1 addition to the Reason 10 rack. 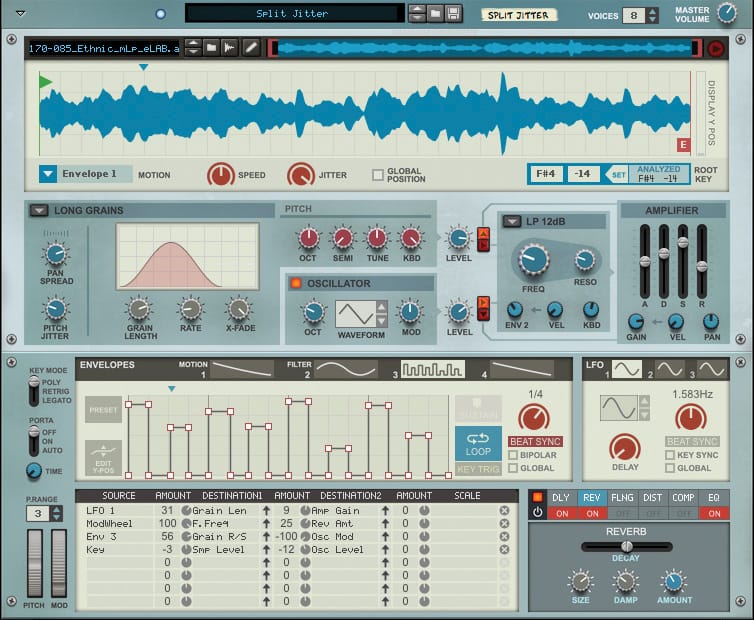 Another first for Reason, Grain is Propellerhead’s first foray into granular synthesis. This machine is best suited to the more experimental side of Reason; aimed more at those who want to scrub through Mike Oldfield’s Tubular Bells with their Theremin, than those who want a quick fix of ‘Analogue Pad 1’. Any length sample can be navigated through with four different engines: Tape, Long Grains, Grain Oscillator or Spectral Grains. ‘Tape’ scrubs for an analogue aesthetic, allowing little more than sample playback, while the other three engines provide more complex means of navigating source samples. Long Grains can get glitchy with long cycles, while Grain Oscillator treats the loci in question as a traditional oscillator, and Spectral Grains dissects the sample, allowing accurate spectral control over frequencies and the smallest grain size of the three. Playback of the sample can be a simple one shot, or may be controlled by a custom envelope a la Europa. All of this can of course be filtered and ADSR’d, before being sent through a now familiar barrage of built-in effects for a final sound. Quirky, cool and creative, I look forward to experimenting with Grain more in future; possibly revitalising an old tune through resampling, or starting afresh with a found sound.

I’ve always hankered after a realistic Reason piano. Radical Piano delivers four, with physically-modelled variations on each! As if this wasn’t enough, mechanical noise can be mixed in and out, attack and decay tweaked and velocity response finely tuned (very helpful on a less-than-ideal synth keybed). The wealth of control is suitably daunting and the browser has a ream of radically different patches. They range from the standard choices to inspiration sparking, and just plain weird — long decay, absurd amounts of reverb and almost no intonation — ideal for… I’ll know it when the time comes. The onboard effects are easily manipulated with one-knob compression and reverb. The stereo width knob is probably my favourite feature, allowing the piano to morph throughout a track from reserved and mono, to epic and wide. Originally a Rack Extension (undoubtedly leaving some previous purchasers a little miffed), Radical Piano makes a worthy addition to the rack as a sound designer’s tool in Combinators; as a mix-compliant instrument; and, with a hammer-action keyboard and continuous sustain pedal, a viable stage piano for those using Reason live.

A choir patch is often a sound I hear when visualising a track, but I was often disappointed by the sounds available to me in Reason, offering not much more than your typical ’90s digital synth. One of three sample-based sound engines (can’t really call them synths, as such) developed with Soundforge, Humana features three properly sampled choirs along with male and female solo sections, catering to the specific sonic needs of the producer. The powerful Mars choir lends itself to epic, filmscore-like tunes. It’s an all-male choir with plenty of bass end and punch. The female and children’s choirs also have their place, but like the other two sample devices (Klang and Pangea), Humana doesn’t set my imagination on fire. Instead, it fills the very specific role as a thickening texture, while Klang and Pangea will probably best serve to reinforce melody or harmony. Though not destined to stand on their own, these three modules bring an organic touch to the Reason rack, for some (often) much needed contrast to the predominantly electronic sounds surrounding them.

Finally! Reason loops that were created within the last five years! Ask the nearest millennial producer and he or she will tell you: there is a stark difference between a 2010 dubstep loop and a 2016 one, for example. Last updated in 2010, Reason’s drum samples and loops were in desperate need of an overhaul, and that day has come. Including all the latest (and not so latest) sounds of hip hop, drum ’n’ bass and trap (which was on the fringes in 2010, and remains the sound of rap today since booming in 2012), drums in Reason have finally been updated. Personally, I’m still using NI Battery for all my drum samples, but a collection of contemporary loops allows for quick beats and an instant groove when a track isn’t vibe-y enough, or when a programmed drum beat isn’t quite providing the pocket required for the perfect bass take. I appreciate this inclusion, Propellerhead, and I hope many others in my demographic may start to make this their DAW of choice after its modernisation in this revision.

JUST GIVE ME A REASON

Reason 10: still the only place you can put an Audiomatic on everything; the home of patching and re-routing; and still my go-to DAW, despite the obvious allure of Ableton Live. Producing contemporary and relevant music is now eminently possible in Version 10, and, while taking said music to the live stage is still not an option (Mattias, please, give us a Performance Mode!), Reason has gone some way to closing the gap on the seemingly unassailable Ableton. Now more than ever, producers of the new millenium have a reason to contemplate this surprisingly affordable, highly creative alternative to Live, offering gigabytes of content and a wealth of sound now comparable to its rival.