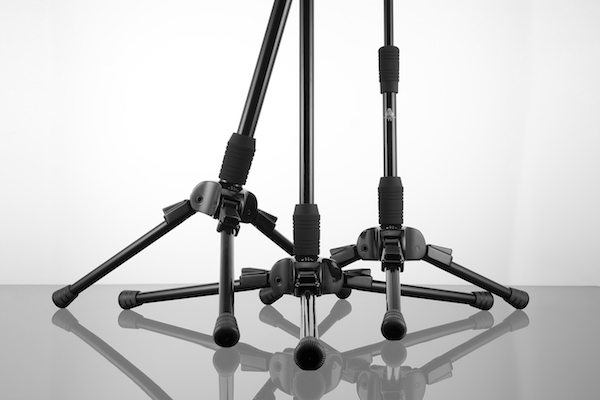 There is no greater example of ‘getting what you pay for’ than microphone stands. To a fault, I have never found a ‘cheap’ stand worth paying any money for. Let me list the faults, and you can all cringe along with me. Culprit number one: cheap plastic tensioning knobs. The outside of them can last an age, but a cheap plastic knob will have its guts milled out in one fell turn by the very screw it’s attempting to drive into a locking position. Forever more they will only lightly grip the screw and turn it until its ‘kind of’ tight, but not tight enough. The result: everything slips. Whether it’s a microphone head rotating like König & Meyer turning in their graves; the bottom of your stand bumping into the floor; or a boom arm limply retreating from whence it came, nothing is safe from a cheap plastic knob.

Culprit number two, is the first’s bigger brother; the wing nut tensioning the boom arm pivot point. Even without the repetitive tweaking of a fidgety lead singer, a cheap one of these — comprising nothing more than a couple of felt sheets rubbing together — will never be able to support anything remotely resembling a condenser microphone. From there, it’s anyone’s guess as to where an el cheapo stand will fail — glued on adaptor threads coming free and never being able to tighten down; end grips falling off; legs going floppy. The worst part about all of these is most cheap stands are difficult to repair; they may not have a screw to tighten, or if they do, it’s already stripped out by the tool in the factory. Either way, don’t waste your time. Buy something good.

STAND UP & BE COUNTED

Rant over; the question now becomes, how much is a good stand? I’ve been a pretty loyal K&M purchaser over the years, and have had a range from lighter-weight, budget-friendly options with welded on, non-telescopic booms, up to more fully-featured, heavy duty jobbies. They’ve all performed admirably for years. I’ve had others recommended as ‘good enough’ and they never have been. I’ve heard good things about other brands, but I’ve formed a ‘fool me once’ attitude with microphone stands that could probably do with some readjusting.

One stand I’d definitely lower my guard for is the Triad Orbit series. Ever since its debut, I’ve looked on with interest at these over-engineered black beauties. Even from afar, they look as if they have all the requisite talents — no plastic knobs anywhere, a grippable locking swivel nut — which is actually the tightening agent for the stand’s central ball pivot joint, and plenty of places to stick an allen key and tighten things up.

Although it purports to be a regular-sized stand reaching similar heights and the same leg spread as a standard K&M boom, when I got a little closer, I realised this was no ordinary stand. I tried to lift the thing up with one hand and almost toppled over — it’s shockingly heavy. A standard high quality K&M boom is 2.8kg, the Orbit — single-telescoping T2 stand and single O1 boom arm — came in at 7.75kg. While Triad includes stage as a recommended use, it’s not for the average bump-in; it’s a heavyweight in the guise of a workaday stand. 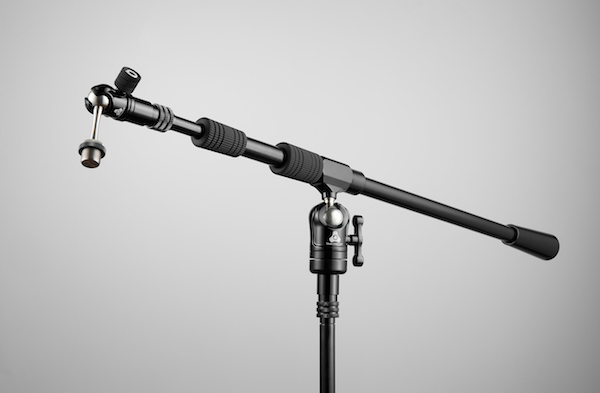 So, what do you get for all that weight. Well, everything. This stand can literally do it all. As well as the T2 base stand, and O1 single boom, we were also supplied with the O2 dual-arm boom. The O2 allows you to position two mics anywhere within its arm span of 1.5m, all on one stand. You can go-go gadget mics anywhere with that combo. At one stage, it became a very expensive short boom stand. We’d forgotten to bring one along to a recent session, and needed to figure out how to get a kick mic through the resonant head port. We jerry-rigged the O2 arm to the end of the boom (which, technically, you’re not supposed to do) and were able to slide the mic into any position we wanted inside the drum.

The central ball joint is really nifty too. By loosening just the one locking screw, you can swivel the head a full 360 degrees, and then, with the ball joint, you can  do full 360 rotations either side of the stand and anywhere in between. I couldn’t think of a position the boom arm couldn’t assume. Even without all that 360 action, it would usually require loosening at least two screws to get horizontal and vertical boom swivel — Orbit only needs one. It also locks in amazingly well and I couldn’t over-tighten and strip it. I positioned my heaviest tube condenser at the end of the extended boom and it never sagged. I chickened out after a day and took it off, but it held long enough to prove the point.

All cheap plastic knob positions have been taken over by clutches. The clutch grips are knurled metal, with a rubberised coating for a more comfortable grip. Again, these hold really well, and as long as you tighten the largest boom clutch first, it’ll never rotate while you’re tensioning up the next one along the arm.

The legs can also be locked into different angles, allowing you to tilt the stand over if you desire. This is where its weight is a bonus, keeping it relatively stable. In fact, the weight means the Orbit can reliably reach further than most. Even though you can use the counterweight to help balance an extended load, it’s surprising how far out you can stick a mic without the stand toppling over. 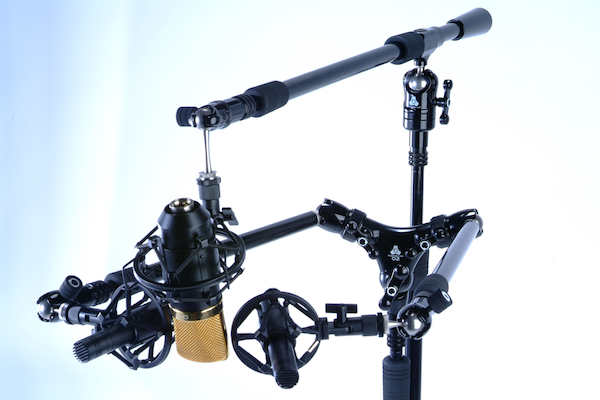 TRY OUT A COUPLE

Lastly, Triad’s quick-change coupler mechanism is a true time saver. Dream about this, studio engineers. Imagine you’ve spent a good couple of hours miking up your drums, listening for phase, double checking everything, and then you spot a pair of Neumann KM84s out of the corner of your eye, and a couple of Coles 4038s next to those. You look back at the AKG C414s already up and think about unscrewing the mic, then loosening the boom to rotate it out of the suspension mount. There goes that careful positioning. In an Orbit scenario, you’d have quick-change couplers in every suspension mount, and be able to switch between mics by simply pulling down on the locking collar to free one and replace it with another.

It’s a surprisingly secure solution. It seems impossible that anything would be able to firmly grasp the sides of the coupler’s hexagonal shaft, but heave away at it and it won’t come loose.

Triad’s Orbit series is designed to be modular, you can just as easily mix ’n’ match microphone adaptors as you can boom arms and stands. They’re incredibly well-built, and while weighty, it does add to its use. I even took to it with an allen key, and found you can dismantle and tighten up almost every part, making fixing or replacing parts on your Orbit completely feasible. Whether you’re looking to replace an entire inventory of stands, or just need a new one to replace a cheap buy, think of an Orbit as a long term investment. I’ve not seen a better microphone stand for the studio.